Alice managed to get her friend and herself a place on the Surf Life Savers Australia ‘float’ in the Sydney Mardi Gras festival.

She has been rehearsing her routine with them over the past weeks. She had a very busy day with a final rehearsal in the afternoon then onto the parade and finishing in the early hours of Sunday after the party.

The 38th annual Sydney Mardi Gras Parade was held on Saturday, 5th March 2016 with approximately 10,000 participants and more than 200,000 spectators cheering from the sidelines. The Parade started at 7:45pm from Whitlam Square, Sydney and ended at Moore Park. The 1.7km route runs from Oxford Street onto Flinders Street down to Moore Park, varying from 2-3 road lanes width some sections being slightly uphill.

At a constantly moving forward pace, it took approximately 40 minutes for Entrants to march from start to finish. 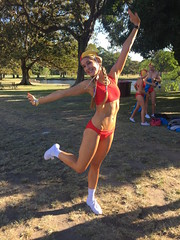 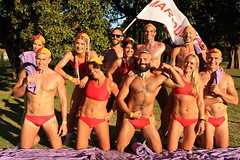